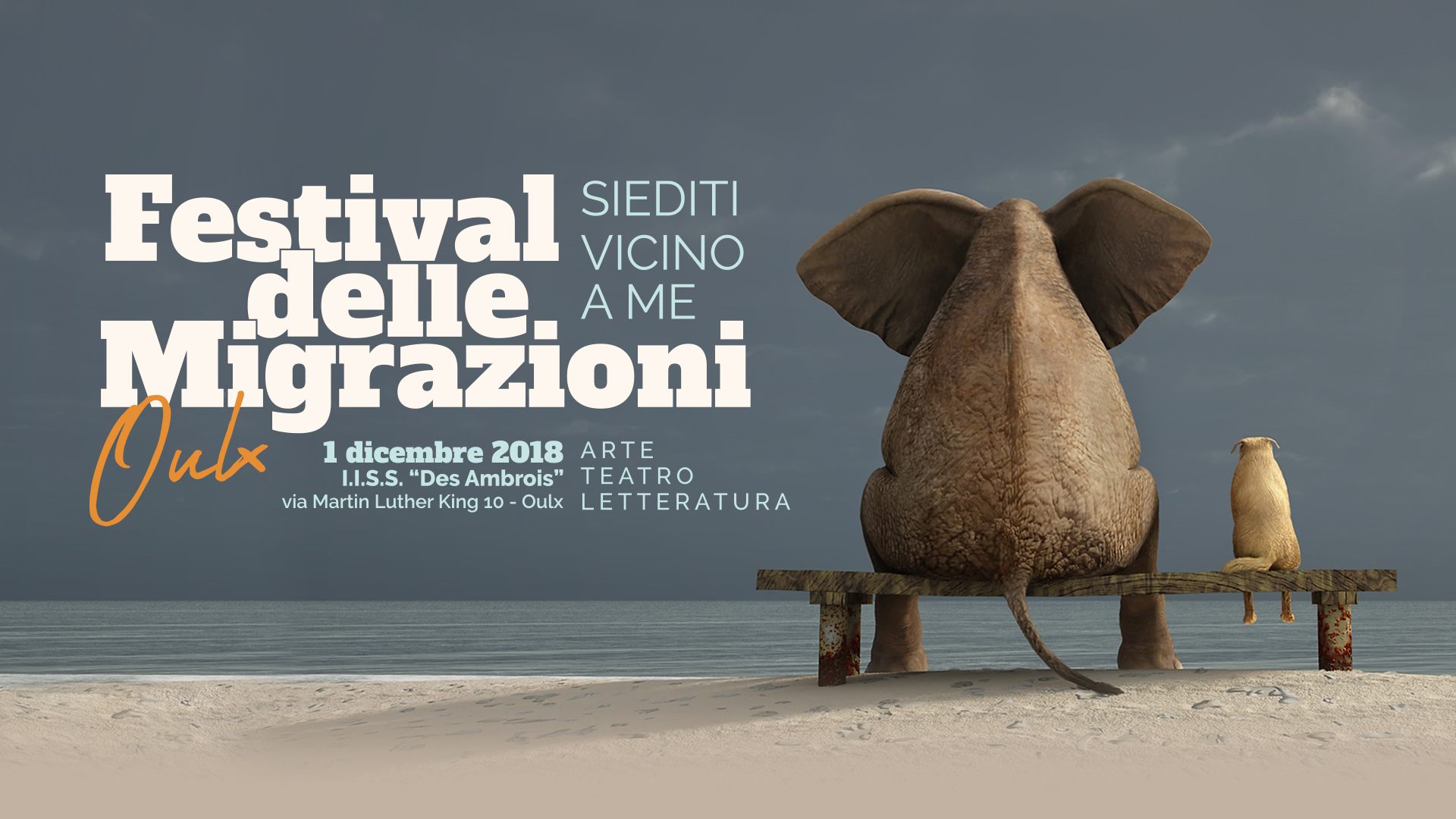 What function can Culture have in relation to the contrasted theme of migration, in a period of risky racist tendencies? That of proposing a different imagery, to give meaning and practice to words like cohabitation, community, care, right to life, inclusion, love, desire, dream and vision of the future.

LUNCH OF ALL NATIONS. The whole world at the table
Activities organized by Sermig-Arsenal of Peace.
Simulation-game in which the participants, having lunch together, experience the problems of the worldwide distribution of wealth and resources, identifying themselves with the peoples of the world.

CAPORALATO: STORIES OF EXPLOITATION AND REDEMPTION
The harsh reality of the living conditions of foreign laborers, between silence and absence of the state. The struggles undertaken against exploitation, racial hatred and indifference. Assumptions of alternative models.
Yvan Sagnet – born in Cameroon, graduated in Engineering, former laborer, trade unionist, founder of the Ass. anti caporalato NO-CAP
Rosario Sardella – journalist and videoreporter. He realized I’m here among the migrants, reportage on the field among the laborers in Puglia.
Amerio Claudio – CrescereInsieme and Maramao: Social Agricultural Cooperative Society based in Canelli. Members are citizens of the world, some Italians and other applicants or holders of international protection.
Conduct Gianluca Gobbi – journalist co-director of Radio Flash

BETWEEN AFRICA AND EUROPE: MIGRATION, COLONIALISM AND DECOLONIZATION
What is left of the desire for freedom of anticolonial struggles? How does the Fortress Europe sink its roots in the colonial past? Dialogue around the crisis of post-independence African states, the lack of Italian colonial memory and the forms of resistance in the bodies and stories that cross the Mediterranean.
Patrice Yengo – professor at the University of Marien Ngouabi of Brazzaville (Congo) and member of the Center for African Studies at the École des Hautes Études en Sciences Sociales in Paris
Liliana Ellena – historian, deals with colonial and postcolonial studies. It is part of the research project “Bodies across Borders: Oral and Visual Memory in Europe and Beyond” (European University Institute, Fiesole)
Fairus Jama – lawyer, deals with immigration and family reunification, Sub-Saharan Africa and second generation
Gabriella Ghermandi – Italian-Ethiopian writer and musician
Leads Suad Omar – cultural mediator, activist and actress of Almateatro

Show
WITHOUT SANKARÀ – Compagnia Piccoli Idilli
Direct by Filippo Ughi
Between 1984 and 1987, Burkina Faso wrote one of the most exciting pages of the 20th century. President Thomas Sankara imagines for the poorest country in the world a free and independent future, far from the plunder of the colonial powers, rejects the hypocritical charity that today engulfs Africa and struggles for culture and the “decolonization of minds”. He was assassinated in 1987. The show tells the tragedies of our days from the point of view of the weakest.

Chamber opera
KATËR I RADËS. IL NAUFRAGIO – KOREJA Theater Sites
Co-production of the Venice Biennale – Koreja
Music Admir Shkurtaj
Booklet Alessandro Leogrande
Directed by Salvatore Tramacere
Katër i Radës is the attempt, through music and words, to free the human universe of those who have gone through one of the many tragedies of the Mediterranean: that of a small Albanian patrol boat, overloaded with men, women and children, sunk in March 1997 in front of the Italian coast. In the work the submerged and the saved are crowded, there are those who survived and those who disappeared, their voices, their thoughts and, above all, their journey to the darkness full of anxieties, desires, dreams, fears and apparitions.

Panel discussion
TURIN OPEN CITY: What future for our territory?
Comparison between the associations of foreign residents, operators, institutions and local authorities, for the construction of possible networks and cultural interventions in the territory.

MIGRANT ART – an informal group that is present in several italian cities
Games of knowledge, sharing of food and artistic performances in a circle of people open to anyone who wants to take part.

LIVING LIBRARY
By Giorgia Beccaria and Ayoub Moussaid
In the living library to read books in which you do not have to browse the pages but … talk to them, because the books are people in flesh and blood.

MEDITERRANEAN REDEMPTION
The Mediterranean which is considered not only as a sea of death but also as a project of redemption and common destinies. A journey through dreams and rebellions, between refugees and revolutionaries.
Gianluca Solera – writer, author of the book of the same name
Yasmeen Mari – Syrian activist
Marta Bellingreri – researcher and writer on the Mediterranean, the Arab world and gender studies
Leads Rosita Di Peri – University of Turin.

Concert
HASPEREN ABESBATZA – Basque choral feminine – accompanied by the EKLEKTICA group
Event in collaboration with Slow Food and with the presence of Terra Madre delegates.

CITIZENSHIP DINNER – SITES NEAR ME
Dinner open to citizens
An extraordinary sharing event. A long table in the courtyard of San Pietro in Vincoli in the spirit of conviviality and encounter. Everyone brings home food to share, we prepare a traditional Somali dish made by the women of the Ass. Sub-Saharan Africa and second generation, which you can enjoy with a free offer.
The table is laid out to experience the emotion of a dinner together.

For information and reservations write to info@festivaldellemigrazioni.it

Concert
Beginning with ONE BLOOD FAMILY – a band composed of migrant children and asylum seekers united by the passion and study of music. From an idea of the Coop. Social Atypica – Ass. Culturale Spazio Rubedo and The Sweet Life Faktory.
The KORA BEAT follow. The band was born in Turin from an idea of the Master Cheikh Fall of Dakar. Kora Beat explore the potential of kora, African harp, in the encounter with jazz, funk and contemporary African rhythms. The result is a blend of totally innovative sounds, supported by an engaging groove.

THOSE WHO NEITHER. The new Italian emigration.
The brain drain deprives our country of promising young people and a balanced generational change, but a less awaited arms flight is taking place in other strata of the population.
Enrico Pugliese – author of the book of the same name. Lecturer at La Sapienza University in Rome, he was director of the Institute of Research on Population and Social Policies of CNR
Tiziana Barillà – author of the book Mimì Capatosta. Mimmo Lucano and the Riace model
Leads Gian Mario Gillio – Ass. Club Article 21, free to …

RIVAL FRONTIERS – SOLIDAL FRONTIERS. Passage in France.
Dialogue on the current and contrasted theme of the crossing by migrants on the border between Italy and France.
Marco Revelli – historian, sociologist, political scientist and journalist
Enzo Barnabà – writer, author of the book Aigues Mortes – The Massacre of the Italians
Roya-Citoyenne – Association of French citizens who bring relief to refugees and migrants
Migrants Caravans – They travel and consolidate relationships of collaboration and solidarity in dozens of realities of resistance.
Roland Siewe – witness of the crossing of the border
Paolo De Marchis – Mayor of Oulx
Leads Beppe Rosso – Artistic Director of ACTI Teatri Indipendenti

THE GREAT BLINDNESS. From climate change to global migration.
Amitav Ghosh, author of the book, talks with Roberto Beneduce.
Literature has been able to recount wars and numerous crises but reveals resistance to telling climate change. What is the reason for this resistance? And what is the link between the climate issue and transnational migrations?
Amitav Ghosh – writer
Roberto Beneduce – founder of the Frantz Fanon center in Turin and professor of cultural anthropology at the University of Turin
Nouhoum Traorè – Malian student, majoring in Environmental Economics at the University of Turin

Show
I VERYFERICI – SHEBBAB MET PROJECT
The Shebbab Met Project company presents itself as a heterogeneous group, people born in the periphery of the world that a vigorous force has pushed towards the center, towards the light. The journey is tiring, full of obstacles. Like all difficult things, this trip is worth telling, shouted, sung, sometimes even spat. Above all, heard.
Winner of the 2017 Ustica Scenario Award.

Show
OCCIDENT EXPRESS – Written by Stefano Massini
With Ottavia Piccolo and theMultiethnic Orchestra of Arezzo
In 2015, an elderly woman from Mosul goes on the run with her 4-year-old niece: a journey of 5,000 kilometers from Iraq to the Baltic. Occident Express is the chronicle of a journey, the diary of an escape. It is a small piece of lived life that makes up the great mosaic of humanity on the way. A ruthless story without stopping: the terrible race for survival. The Multiethnic Orchestra of Arezzo accompanies us through the thousand places traveled by the protagonist.

STAFF OF THE FESTIVAL

For information and reservations write to info@festivaldellemigrazioni.it